Reflexology is one of the most natural and accessible forms of alternative or complementary therapies available today as it encourages the body to heal itself, without using any oils, lotions or tablets.

Reflexology is a holistic form of therapy treating the body as a whole and bringing the body's energy back into balance (or homeostasis) to ensure better health & well being.

Reflexology is normally applied to the feet, although it can be given to the hands if preferred. 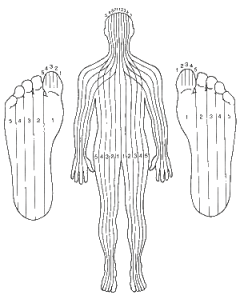 The body is also divided into ten longitudinal zones, five on the right hand side of the body and five on the left. Each zone extends from the toes to the brain and down to the fingers, and extends from the front of the body to the back in equal widths at any given point. Organs of the body falling within a zone are linked by the energy running through that zone and problems with one organ can relate to problems in another organ within the same zone.

Reflexology can help to balance the body's energy flow by treating both the symptoms of a problem and the underlying cause of the problem too.

The feet are further divided into Transverse Zones, to reflect the position of the reflex points more fully within the body.

Reflexology was first used by the ancient Chinese and Egyptians thousands of years ago and involves massaging reflex points on the feet or hands to bringing about relaxation, stress relief and healing properties by unblocking the body's energy flows.

The first record of Reflexology being used as a therapy is shown in the following tomb drawing of the Egyptians dating back to about 2330 BC. This picture shows a man applying massage to the sole of the foot of another man.

Reflexology was also known to some of the primitive African and Red Indian tribes.

Modern day reflexology was developed from zone therapy which was introduced by Dr. William Fitzgerald, an American Ear Nose and Throat consultant, in 1917. Dr. Fitzgerald became interested in pressure therapies while practicing in Vienna where he discovered that some people felt less pain than others through the application of pressure on certain parts of the body. This pressure caused the body to produce its own anaesthetic affects alleviating pain. This can still be seen today through such actions as gritting the teeth when in pain or grabbing the sides of a dentist's chair to alleviate pain.

Zone therapy was further developed in the 1930's by Eunice Ingham, the pioneer of modern day reflexology.

In the 1960's Doreen Bayly, a student of Eunice Ingham, introduced reflexology into Britain where it is now widely recognised as a simple and natural form of therapy.

The teachings of Doreen Bayly still continue today through the Bayly School of Reflexology now run by Nicola M Hall. 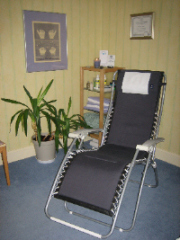 When you come for your first reflexology session you will be asked to complete a short medical questionnaire and give a reason for your visit. This helps to give the practitioner an understanding of your health issues.

You will be seated in a reclining chair and asked to remove your foot wear. The chair will be reclined and pressure will be applied to the reflex points of both feet (or hands if more appropriate) starting with the right foot then the left.

On most occasions pressure will be applied to the reflex points using the side and tip of the thumb and the fingers will be used to support the foot.

Once pressure has been applied, the thumb will be eased back off the reflex point and moved forward to the next point using a consistent pressure that should not feel uncomfortable.

Some reflexes may feel tender or bruised to the patient, or feel gritty to the practitioner, this will indicate to the practitioner that there is an imbalance in the corresponding part of the body and a diagnosis can be made and treatment given to correct the imbalance. 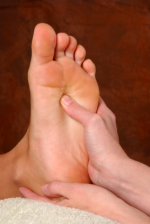 A Reflexology treatment session lasts for approximately one hour and will end with some gentle foot exercises. After treatment the patient should feel very relaxed, possibly sleepy and sometimes energised.

Treatment is normally given once a week and the number of sessions required depends on the condition being treated, but 4 – 6 sessions are normally recommended for maximum benefit.

After the initial sessions, some patients may wish to continue treatment on a monthly basis to prevent problems re-occurring or to maintain health and well being.

Reflexologists believe this treatment has many benefits that I am unable to list because of restrictions imposed by the Advertising Standards Authority.

I'm happy to give you more information about any of my treatments.
Just call me on 07962 975 124, or email me at catherine@tranquilhaven.co.uk

You'll find me at

You'll find regular articles giving help and advice on how to combat many ailements and how to cobat stress.